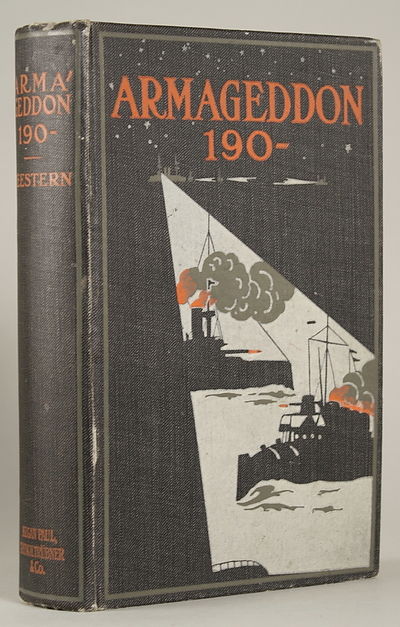 by Grautoff, Ferdinand H., writing as "Seestern.
London: Kegan Paul, 1907. Octavo, pp. [i-iv] v-vii [viii] ix-xxiii [xxiv] 1-402 [403: printer's imprint] [404: blank], original pictorial black cloth, front panel stamped in gray, red and white, spine panel stamped in red and gray. First edition in English. Translation of '1906' DER ZUSAMMENBRUCH DER ALTEN WELT (1905). Account of an imaginary world war set in the near future that exhausts the European nations and shifts the balance of power to the United States and Russia. "The English introduction of the revolutionary dreadnought battleships, and the Moroccan crisis of 1905, stimulated the writing of a number of German war visions. The most successful of these was Ferdinand Grautoff's '1906' DER ZUSAMMENBRUCH DER ALTEN WELT (1905). By 1907, 125,000 copies had been published. This best seller would serve as an archetype for the genre well into the 1930s. In his account of a coming Anglo-German conflict, Grautoff exhorted the public to support the Kaiser's quest for a stronger navy. '1906' was a skillful mixture of fact and fiction, a persuasive portrayal of future war and Germany's stake in expanding its power at sea." - Fisher, Fantasy and Politics: Visions of the Future in the Weimar Republic, p. 4. Bleiler, Science-Fiction: The Early Years 1991. Clarke, Tale of the Future (1978), p. 34. Clarke, Voices Prophesying War: Future Wars 1763-3749 (1992), p. 232. Locke, A Spectrum of Fantasy, p. 191. Bleiler (1978), p. 177. Reginald 06254. See Bloch (2002) 2866. Old prize label affixed to front free endpaper, contemporary ink gift inscription above it. Cloth lightly worn at edges, a very good copy. (#143286) (Inventory #: 143286)
$250.00 add to cart or Buy Direct from L.W. Currey
Share this item
L.W. Currey Inc.
Offered by