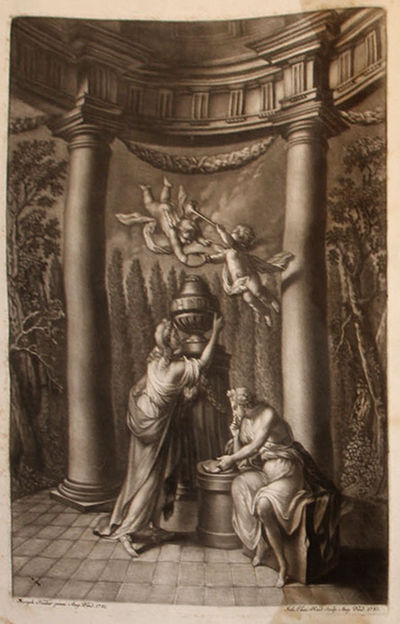 by FUESLI [Fussli], Jean Gaspard
Augsburg: Jean Jaques Haid et Fils, 1782. Hardcover. Very Good. Folio [35.5 x 26 cm]. engraved frontispiece, engraved portrait, 19, 24 pp., with 132 mezzotint engravings (numbered I-LXXVIII, 1-32 and 1-22) on 79 plates, each plate tipped to a blank page. Contemporary paper boards, spine with label in manuscript, chipped at joints and edges. Mild toning on first few leaves; edges of blank pages darkened. Old ownership stamp partially effaced in margin of title page and one other leaf. Overall an attractive copy. Very rare first edition of this work illustrating the medals of Swiss-born Johann Karl Hedlinger (1691-1771), the celebrated medalists whose works rate as "the most elegant and individualistic effigies of the 18th century." After training as a goldsmith and working for the mints in Lucerne and Paris, he was invited to become chief engraver of the Stockholm Mint, where he worked for more than a quarter century (1718-1745), commemorating events in the reigns of three monarchs and producing a series of medals that depict Swedish rulers from the 9th century onwards (plates numbered 1-32). Fuesli's preface, a short biography of Hedlinger (unsigned, but definitely not by Fuesli), and a list of subjects of the medals appear in both German and French. What follows is a veritable Who's Who of political theater during the European Baroque. The most well-represented monarch, of course, is Frederick I (r. 1720-1751), who also shares three double-portraits with Queen consort Ulrika Eleonora. In addition, Hedlinger cast a number of commemorative medals for heads of state, among them Christian VI of Denmark and Norway, and England's George II. These are generally intermixed with contemporary portraits of notable Swedes: Arvid Horn (1664-1742), general to Charles XII and manager of nearly all of Frederick's state and foreign affairs; Olof Thegner, magistrate and governor of Stockholm; Carl Gustav Tessin, ambassador to France from 1739-1742; and Tessin's father Nicodemus the Younger, the country's most famous architect. Hedlinger's work was so esteemed that he was invited to apply his talents for the rulers of Poland, Denmark, Belgium and other countries. Most politically significant, however, are two Russian portraits: the first depicting Andrei Osterman, the German-born factotum for Tsar Peter I who arranged the Treaty of Nystad in 1721 (depriving Sweden of the Baltic states), and the other depciting Admiral Nikolai Golovin, who brilliantly commanded Russia's Baltic Fleet during the decisive Russo-Swedish War (1741-1743). These medals are testament to a Swedish monarchy whose military clout and international influence were rapidly on the wane. A medal cast for Kozbekci Mustafa Aga, the Ottoman envoy who arrived in Stockholm in 1727 to collect on the debts of Charles XII, seems to sharpen the blow-as does a portrait of Swedish general Charles Emil Lewenhaupt, who, after inciting the disastrous war with Russia, was executed in 1743 as a sort of symbolic national expiation. The volume also includes Hedlinger's portraits of fellow engravers Joseph Roettiers and Antonio Maria de Gennaro, as well as a handful of striking self-portraits. ............................................................................ OCLC: NYPL, NYU. * Not in the Berlin Catalogue. Collation agrees with that of the copy in the Herzog-August Bibliothek. On Fuesli, see Bénézit, Dictionary of Artists XI, 857; cf also the Encyclopedia Britannica. (Inventory #: 4380)
$4,499.00 add to cart Available from Martayan Lan
Share this item
Martayan Lan, Inc.
Offered by