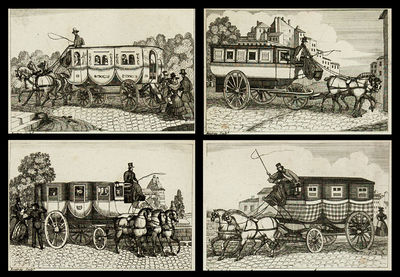 Extremely rare illustrated brochure announcing the introduction of mass public transport to Paris, the second city to adopt the 'omnibus' after its invention in Nantes by Stanislas Baudry in 1826. As the present work makes it clear, however, the original purpose of such carriages was hardly to transport workers to and from their jobs, but rather to make sightseeing day-trips and everyday voyages from one neighborhood to the next both accessible and affordable to middle-class Parisians.

Evidently intended as a promotional brochure, and presumably published at Baudry's behest, the present work announces the introduction of 'new carriages from 25 centimes per station, now operating in Paris'. Four different types of public transport carriage are described: first the newly-established Omnibus (which fits at least a dozen passengers, judging by the illustration), followed by the Batignolaise, the Dame Blanche (a large vehicle distinguished by its white color and elegant trim), the Favorite, the Diligente, the Tricycle, the Béarnaise, the Écossais (with its distinctive Tartan lining), and the Caroline. Four of these (the Omnibus, the Dame Blanche, the Tricycle and the Écossais) are illustrated with fine engravings depicting the vehicle in action on the cobbled streets of Paris. The brochure offers timetables and station stops for the carriages, each of which evidently ran a different route through the city. All advertised fares begin at 25 centimes, more than affordable to the average bourgeois in the first quarter of the 19th century.

For the passenger wishing for a more private ride, the second brochure in the present work provides details of personal carriages for hire, much the same as modern day taxis. A list of passengers' and drivers' rights is given (rates vary depending on time of day; coachmen are prohibited from riding their horses too vigorously; each station is attended by an 'inspecteur permanent'; fares must be paid in advance for conveyance to spectacles, balls, and public amusements; etc). Sample rates from popular destinations are given: taking a Courageux from Rue J. J. Rousseau to Belleville will cost just 40 centimes, while a standard Cabriolet in the city centre charges 60 centimes for the first 15 minutes of its hire, 2.5 centimes for every minute thereafter.

The omnibus – expressly designed to carry a large number of passengers in a municipal setting, with frequent stops – was pioneered and introduced by Stanislas Baudry in Nantes in 1826. His idea of a highly-organized public transportation system quickly proved successful, and some 2.5 million passengers were estimated to have ridden his omnibuses during the first 6 months of their operation in Paris. The first British omnibus commenced its route in July, 1829, and the vehicle reached New York the same year. The present work was probably issued by an operator of Baudry's own company, or by one of the numerous rival companies which quickly arose to take advantage of this new demand.

We have located one US copy of the illustrated brochure, held by the Met.