Sailor, Beware!; Variations on a Familiar Theme, in Eight Scenes 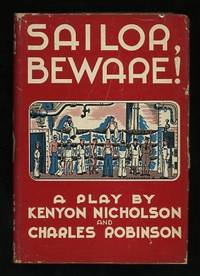 by Nicholson, Kenyon, and Charles Robinson
New York: Farrar & Rinehart. Very Good in Good dj. (c.1933, 1932). First Edition. Hardcover. [quite a decent copy, with some slight deterioration to the cloth near the top of the rear cover, tiny bump/dent at bottom of rear cover, spine slightly turned but binding solid; jacket edgeworn and moderately soiled, and has been internally repaired and reinforced with brown paper tape, which has disguised various small bits of paper loss at corners and edges (still reasonably attractive, however)]. "Uproarious Naval Comedy" that served as the basis for a seemingly endless number of film adaptations, in 1936 (as "Lady Be Careful"), 1942 (as "The Fleet's In") and finally under its original title in 1952. The wacky sailors in the three versions, respectively, were: Lew Ayres, Benny Baker and Buster Crabbe; William Holden and Eddie Bracken; and Dean Martin and Jerry Lewis. (Quick, what's the last "Naval comedy" you can remember? If the first title that came to mind was "The Private Navy of Sgt. O'Farrell," Frank Tashlin's completely non-uproarious 1968 groan-fest with Bob Hope and Phyllis Diller -- well, if you wondered why the genre has died out, that might be your answer right there.) . (Inventory #: 15278)
$40.00 add to cart Available from ReadInk
Share this item
ReadInk
Offered by