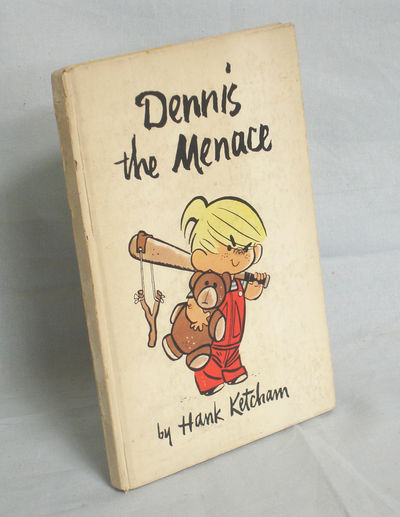 by Ketcham, Hank
New York; (1952): Henry Holt and Co. First Edition. Octavo. . Signed Hank Ketcham, Dennis' pop and inscribed and with a pen & ink drawing of Dennis, dated 1952, NYC. First released in March, 1951, as a daily syndicated panel, with Post-Hall Syndicate in New York City. The first Sunday page, in full color, was launched in January of 1952. The present copy is a first edition in book form, of Ketcham's work, a short compilation of the many hilarious Dennis the Menace cartoons. A fun and unforgettable work bound in glossy pictorial paper covered boards depicting a blonde headed Dennis with a bat slung over his shoulder, with a slingshot held by the bat and holding teddy bear, dressed in red overalls, lettering black, a photograph of the author and short biography on the rear board. Some rubbing to boards, with wear to spine with a few nicks. A very good copy. (Inventory #: 017293)
$225.00 add to cart or Buy Direct from
ALCUIN BOOKS, ABAA
Share this item

The Wild Sports of India: With Remarks on the Breeding and Rearing of Horses and the Formation of Light Irregular Cavalry

Boston : Ticknor and Fields , 1860
(click for more details about The Wild Sports of India: With Remarks on the Breeding and Rearing of Horses and the Formation of Light Irregular Cavalry)

Fred's Fresh Start and What he Did By Moral Courage

Boston, Nd(ca.1877) : Henry Hoyt
(click for more details about Fred's Fresh Start and What he Did By Moral Courage)
View all from this seller>