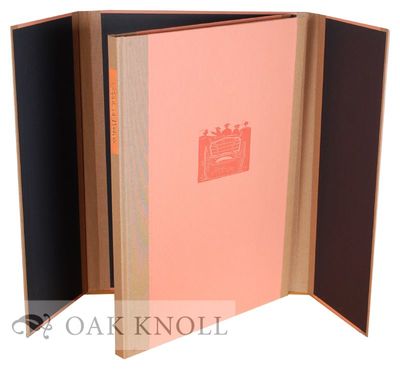 half calf and paper covered boards, chemise with ties

At the time, in 1995, the Press had printed some 100 posters, and in the eighteen years since then another 150 have been added to the total. The thirty-five chosen here show off a great variety of typefaces on an equally esoteric variety of papers from England (some over a century old), France, Italy, Czech Republic, Germany, Japan and Korea. They include, among a dazzling array of the Press's extensive collection of fonts, illustrations from linocuts, wood-engravings, and, in special copies, pochoir.

Whittington Posters are produced as a distraction from more important projects, usually in small editions of 100 or 200 copies, and given away or sold on open days, but posters have nevertheless become an important part of the Press' output in helping to spread the message about its activities. By their nature, they are occasional and ephemeral, and the only time they will ever come together is in a collection such as this.

Also included in the collection are posters by Tom Mayo and Patrick Randle, which add a radical note to Whittington's normal fare. An article describing the background and development of the Press's posters appeared in Parenthesis 20 (Spring 2011). Prospectus loosely inserted. (Inventory #: 116888)
$1,140.00 add to cart or Buy Direct from Oak Knoll Books
Share this item