Original Sketch of "Woman and Fawn" 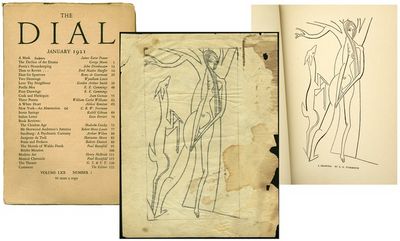 by CUMMINGS, E.E.
c. 1921. In the 1920s, E.E. Cummings was a regular contributor of both writing and artwork to The Dial magazine, which was the preeminent Modernist journal of its time, publishing such writers as Joyce, Pound, Eliot, Cocteau, William Carlos Williams, Marianne Moore, Ford Madox Ford and such artists as Picasso, Cezanne, Matisse and Kandinsky. Cummings was only 25 years old when his first pieces were accepted for The Dial and, notably, it was the only place where his poems and his artwork were published side by side on a regular basis. The January, 1921 issue had four drawings and a poem ("Puella Mea") by Cummings: this is Cummings' original sketch for one of those drawings, perhaps the most well-known of them, of a fawn on its hind legs, next to a nude woman, beneath a tree. This sketch was used as his pencil transfer, and as such is drawn on both sides of the paper. The final product, which was ink and graphite on paper, is now at the Metropolitan Museum of Art, a bequest of Scofield Thayer, Cummings' friend and mentor and the editor of The Dial. This sketch is on 8-3/8" x 10-7/8" paper, with a 5" x 9" pencil border. Stained and chipped, mostly in the right margin; very good. With a Gotham Book Mart exhibit number (#245) in the upper left hand corner, where a chip is pending. A copy of The Dial, Vol. LXX, No 1 [NY: Dial, 1921], with the published drawing is included and is near fine with a small spine nick and the usual wear to the yapped edges. An iconic image in its very first incarnation. No Binding. Very Good. (Inventory #: 029650)
$4,000.00 add to cart Available from
Ken Lopez - Bookseller
Share this item