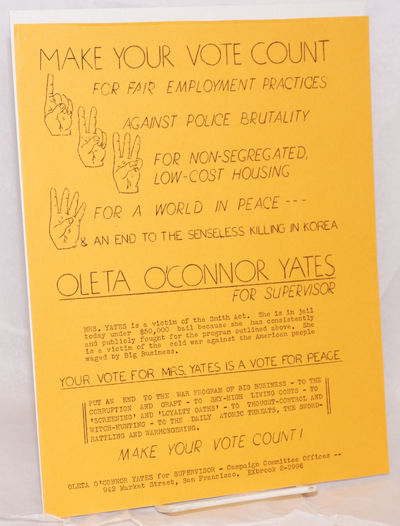 by [Yates, Oleta O'Connor]
San Francisco: Oleta O'Connor Yates for Supervisor Campaign Committee, 1951. 1p, 8.5 x 11 inches, mineograph on gold paper with text and graphics, very good condition. Leaflet supporting Yates's candidacy aimed at African Americans with calls for non-segregated low-income housing, an end to police brutality, and an end to the Korean War as well as an FEP. The FBI arrested Yates, California State Secretary of the Communist Party, in Los Angeles on 26 July 1951 for violation of the Smith Act. Her husband filed her candidacy for a seat of the SF Board of Supervisors in early October 1951. (Inventory #: 178293)
$35.00 add to cart or Buy Direct from Bolerium Books
Share this item