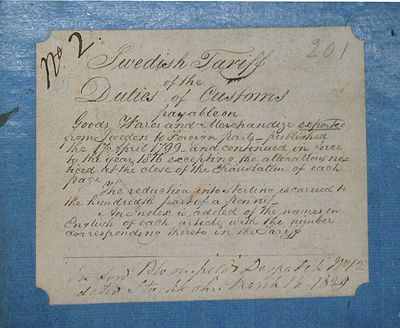 by [British Economic History]. Bloomfield, Benjamin, 1st Baron Bloomfield [1768 - 1846]. Canning, George [1770 - 1827]
[Stockholm], 1829. Blue paper-covered boards, originally with leather spines (leather almost completely worn away); handwritten titles with dates pasted to front covers. Boards separated on 4 volumes and in some volumes leaves are gathered and tied with ribbon, but are loose inside notebook; some ties are broken. Some light foxing mostly on end papers each volume. Script is slightly faded but legible in all volumes. Library discard stamp on versos of covers of Vols. A and 8 and on ffep of Vol. 4. Overall, a Good set.. 7 notebooks: numbered 2 - 6, 8 & 'A'. Each volume with index except for No. 6: "Alterations on the Tariff Duties on Exports 1820 to 1824". 10-1 4" x 9", except Vol. 2: 9-1 2" x 7-1 2".

When Jean Bernadotte was crowned Charles XIV King of Sweden and Norway in 1818 he began to introduce the ecomomic policies that would revitalize the country and move it towards industrialization. His government encouraged free enterprise and industrialized manufacturing, which soon helped to establish Sweden as a more powerful trade partner for major European countries and especially Great Britain. Sweden already had a complicated customs system in place that charged major levies on foreign trade. Charles XIV improved and promoted the tariff system, soon paid off all foreign debt, increased the national revenue, and greatly enriched his government. His next step was to develop a policy of peace abroad and beneficial diplomatic relations with Sweden’s trade partners. Benjamin Bloomfield, 1st Baron Bloomfield, was England’s answer to blunt the edge of Sweden’s aggressive customs policies. Named by his friend and confidant the Prince Regent as Envoy Extraordinary and Minister Plenipotentiary to the Court of Bernadotte, Lord Bloomfield arrived in Stockholm in 1823. He apparently used these notebooks as a reference, as he and his legation took steps to influence the customs process to England’s advantage. As he took up his official duties in Stockholm, Lord Bloomfield encountered a wilderness of commercial negotiations that interrupted and particularly discouraged the trade of British manufactured goods for Sweden’s valued bar iron, Baltic timber and oats. Fortunately, King Charles XIV appreciated the manners and conversation of a foreign minister who had spent the best part of his life at the center of a brilliant court. In no time, Lord Bloomfield’s work seemed to consist chiefly of feasting, dancing and drinking champagne. He and Bernadotte became friends, cementing the harmony of the two nations, and as Lord Bloomfield hinted at the justice of rescinding the harder regulations, he began to establish a freer and more favorable importation system. The delighted King George IV noted that Lord Bloomfield’s patriotism was unbounded. George Canning, the brilliant politician and orator, was Britain’s head of the Foreign Office at the time of Lord Bloomfield’s mission to Sweden. Lord Bloomfield’s dispatches of which these notebooks were a part, were directed and addressed to him and his officers, and it was his liberal polices that Lord Bloomfield carried out. Most volumes contain columns of individual commodities and their tariffs printed in Swedish, with the same commodities, amounts traded in import and export, and their costs handwritten in English translation on opposite pages. The ordinances and proclamations are handwritten in English. There are no official court seals, but spaces are left for them. Although at this time the Swedish government was working toward a declaration against slave trafficking, the slave trade was still flourishing in the Caribbean. King George, Lord Canning and Lord Bloomfield were determined to create an alliance between their countries for the suppression of the slave trade.These lists do not mention slaves as a commodity, but laid in to the volume lettered A is a proclamation regulating slave trading in Saint-Barthelemy, a Swedish-owned island with a thriving duty-free port. The listed commodities vary from volume to volume and reveal the vast quantity of goods in almost all cases traveling between countries by ship: a single page from one notebook includes tariffs for arrack, brandy, coffee, glass, rum, wood (spars, staves), woven goods, ribbons of silk and velvet, cinnamon, cardamom, currants, fennel seeds, almonds, vanilla, liquorice, ginger, cloves, pepper, porcelain, tea, oranges, agates, alabaster, feathers, tiles and bricks, furs and hides, cannon, and gun stocks. Contents of Notebooks by Volume:No.2: On Exports of Sweden to Foreign Parts Published the 17 of April 1799 and continued in force to the year 1816.  No. 3:.On Imports of Sweden from Foreign Parts – published the 20 March 1816 and continued in force to the year 1824. No. 4: On Exports ofSweden to Foreign Parts published the 24 April 1816 and continued in force to the year 1818 inclusive. No. 5: On Exports of Sweden to Foreign Parts published the 22 December 1818 and continued in force to the year 1824 inclusive. No. 6: Alterations in the Tariff Duties on Exports 1820 to 1824. No. 8: Imports or exports of Sweden published the 16 March 1826 and acted upon at and from the 1st June said year, and now in force, with the exceptions stated in the Ordinances of 13 December 1826 and 29 Dec.r 1827.A. Alterations in the Tariff of Duties of Customs for 1827-1828; Dues Levied under the Title of Convoy Duty; Treaty Between Sweden and Russia in which the Rate of Duty to be paid on the Commerce between Sweden and Finland is stated; Proclamations regulating the trade of St. Bartholemew [sic]; Containing No.9, 10, 11, 12, 13 & 14. (12 missing; presumably the Treaty Between Sweden and Russia which is not present.). No. 13 and 14 in this volume are handwritten on large sheets of folded laid paper. A wonderful primary source for documenting this aspect of British ecomomic history. (Inventory #: 37520)
$750.00 add to cart or Buy Direct from Tavistock Books
Share this item

Boston : Published by Oliver Ditson, 115 Washington Street , (n. d.)
(click for more details about WALTER & FLORENCE. The Subject from Mr Charles Dickens' Tale, "Dombey and Son," The Music by Stephen Glover)
View all from this seller>