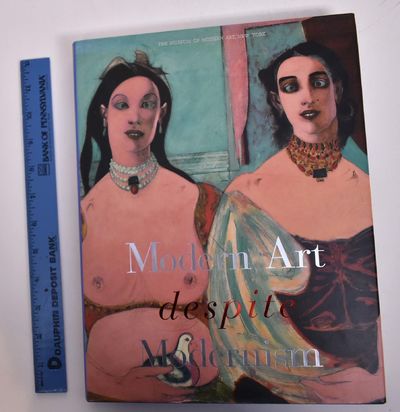 by Storr, Robert
New York: Museum of Modern Art / Harry N. Abrams, 2000. 1st ed. Hardcover. VG/VG. Azure cloth, azure & pictorial dust jacket with mylar cover, 248 pp., 172 color & 26 BW illus. "This book, published in conjunction with an exhibition drawn from the collection of The Museum of Modern Art, New York, explores the antimodernist impulse and, in so doing, presents a new vision of the complexities of modern art. In an in-depth study, Robert Storr, Senior Curator in the Museum's Department of Painting and Sculpture, traces the development of what he calls the anti-avant-garde, from its first appearance as the widespread "return to order" in European art after World War I through the reemergence of figuration in international work of the 1980s." "Storr discusses the social, political, and historical forces affecting paintings, sculpture, drawings, and prints, along with the influence of such major figures as Pablo Picasso, Otto Dix, and Philip Guston on the ascendancy of classicizing, narrative, and so-called traditional art at various times in the twentieth century. The fact that artists often crossed the boundary between modernism and the anti-avant garde - and that their aesthetic choices were not necessarily aligned with their political views - may surprise readers. Storr also looks at changing notions of taste and the reception of avant-garde art in the United States, a process in which The Museum of Modern Art played a key role."--Jacket. (Inventory #: 135587)
$30.00 add to cart or Buy Direct from Mullen Books
Share this item