The Dow Theory: An Explanation of Its Development and an Attempt to Define Its Usefulness As An Aid In Speculation. 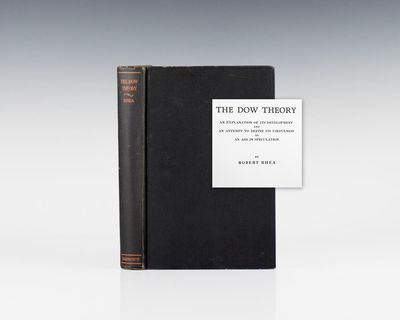 by Rhea, Robert
New York: Barron's, 1932. First edition of this classic work by one of the pioneering figures in the history of Dow Theory. Octavo, original cloth. Inscribed by the author on the front free endpaper, "To Katherine Hubert from the compiler of these notes Robert Rhea June 22, 1933." Laid into this volume is a pamphlet by Rhea, entitled the "Dow Theory Comment." Books inscribed by Rhea are rare. Originally published serially by Barron's, it is an explanation of Dow Theory development and an attempt to define its usefulness as an aid to speculation. Rhea carefully studied 252 editorials of Charles H. Dow and William Peter Hamilton in order to present Dow Theory in terms that would be useful for the individual investor. (Inventory #: 3180)
$1,800.00 add to cart or Buy Direct from
Raptis Rare Books
Share this item

The Sonnets of William Shakespeare. [Cosway].

London : The Riccardi Press , 1913
(click for more details about The Sonnets of William Shakespeare. [Cosway].)

Shakespeare’s Comedy of The Tempest with Illustrations by Edmund Dulac.

London : Hodder & Stoughton , [1908]
(click for more details about Shakespeare’s Comedy of The Tempest with Illustrations by Edmund Dulac.)
View all from this seller>