News of a Kidnapping. 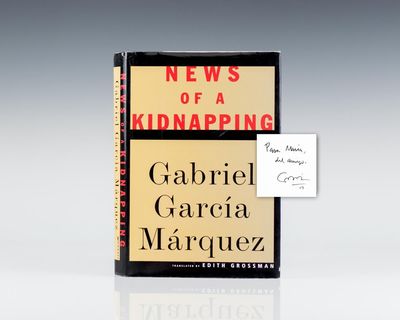 by Garcia Marquez, Gabriel; Translated by Edith Grossman
New York: Alfred A. Knopf, 1997. First edition of this work of nonfiction by the Nobel Prize-winning author. Octavo, original half cloth. Inscribed and dated by Gabriel Garcia Maquez on the half-title page. Fine in a fine dust jacket. Jacket design by Carol Devine Carson. Translated by Edith Grossman. The book then examines the first in a series of related kidnappings. On 30 August 1990, Diana Turbay, director of the TV news program Criptón and magazine Hoy x Hoy, was abducted along with four members of her news team. They include editor Azucena Liévano, writer Juan Vitta, and camera operators Richard Becerra and Orlando Acevedo. German journalist Hero Buss was also with them when they were taken. Turbay is the daughter of former Colombian president and Liberal Party leader Julio César Turbay. "A powerful story. . . . In a series of telling strokes, shifting subtly from one perspective to another, García Márquez conveys the madness of the hostages’ imprisonment, the despair, the anger, the false hope, the resignation" (San Francisco Chronicle). (Inventory #: 3162)
$400.00 add to cart or Buy Direct from
Raptis Rare Books
Share this item