Diary of a Bad Year. 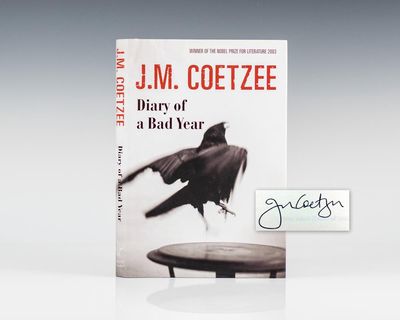 by Coetzee, J.M
London: Harvill Secker, 2007. First British edition of this groundbreaking novel. Octavo, original boards. Signed by J.M. Coetzee on the title page. Fine in a fine dust jacket. J.M. Coetzee once again breaks literary ground with Diary of a Bad Year, a book that is, in the words of its protagonist, a response to the present in which I find myself. Aging author Senor C has been commissioned to write a series of essays entitled Strong Opinions, of which he has many. After hiring a beautiful young typist named Anya, the two embark on a relationship that will have a profound impact on them both especially when Alan, Anya's no-good boyfriend, develops designs on Senor C's bank account. Told in these three voices simultaneously, Coetzee has created any entirely new way of telling a story, and nothing less than an involving, argumentative, moving novel (The New Yorker). (Inventory #: 3191)
$300.00 add to cart or Buy Direct from
Raptis Rare Books
Share this item