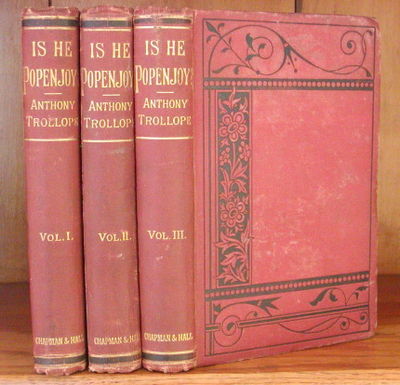 by Trollope, Anthony
1878. A Novel. In Three Volumes. London: Chapman & Hall, 1878. 2 pp undated ads in Vols I & II (none called for in Vol III). Original reddish-brown cloth decorated in black. First Edition. Like so many Victorian novels, this one hinges upon the question of who is the legitimate (or illegitimate) heir to a fortune and title -- or, in this case, "Will the real Lord Popenjoy please stand up?" Although the number of first edition copies issued is unknown, Sadleir places this title toward the top of his Trollope list of comparative scarcity -- fourteenth scarcest of the fifty-three titles. This set is in very good-plus condition, perhaps near-fine (there is minor rubbing at the binding extremities, and a corner of the Vol II front cover has a faint damp-mark; the cloth and gilt remain quite bright, and the original yellow endpapers remain intact). Since the Victorian three-decker was meant to be rented and not bought by the public, most copies went straight from the publisher to a lending library (but not this set). IS HE POPENJOY? is more typically encountered rebound, or at best in original-but-deplorable state. Sadleir (TROLLOPE) 49. (Inventory #: 12423)
$1,450.00 add to cart or Buy Direct from
Sumner & Stillman
Share this item