Springtime in the Rockies (Original screenplay for the 1942 film) 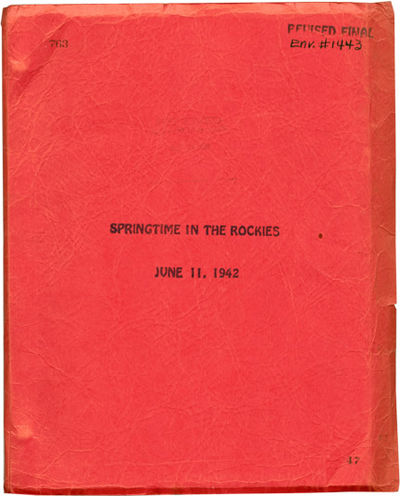 Betty Grable's starring debut remains one the greatest Technicolor musicals produced by Fox in the 1940s, making grand use of the "let's move the action from the city to the country" approach, employing Harry James and his orchestra at their peak, and pulling out all the stops on the musical numbers-with Carmen Miranda's version of "Chattanooga Choo-Choo" and the debut of the classic song, "I Had the Craziest Dream" topping things off.

Red titled wrappers, stamped REVISED FINAL on the front wrapper, rubber-stamped project No. 763 and copy No. 47, dated June 11, 1942, and with the holograph file notation "Env. #1443" at the top right corner. Distribution page present, with receipt intact. Title page present, with a date matching the front wrapper. 129 leaves, with 1 retake page paper-clipped to the rear wrapper, mimeograph duplication, with blue revision pages throughout, dated variously between 6/13/42 and 7/20/42. Pages Near Fine, wrapper Very Good plus, bound with two gold brads.