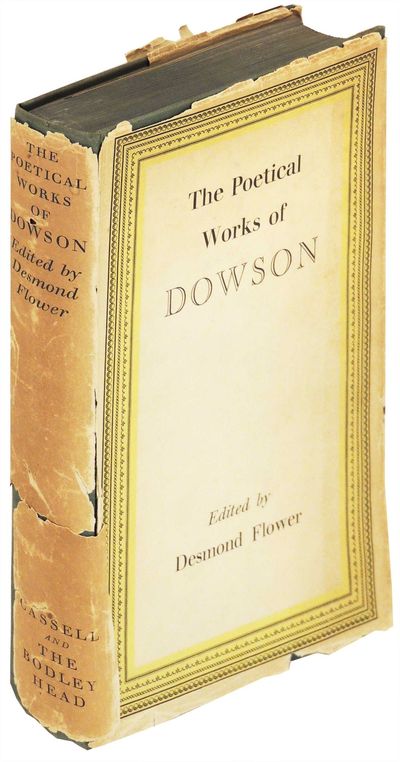 by Flower, Desmond, editor and introduction
London: Cassell and Co., and John Lane The Bodley Head, 1934. Hardcover. Near Fine/Chipped and Torn. Hardcover. First Edition. An interesting and unusual presentation copy from the editor to Clementine Churchill, wife of Winston: "To Mrs. Churchill, these poems from the day when Fanny's First Play was written; and in memory of the pleasure of seeing it in her company. August 11, 1935 Desmond Flower." The inscription makes reference to Fanny's First Play, written anonymously in 1911 by G. Bernard Shaw. Desmond Flower (1907-1997) was a publisher, collector, and writer. He joined his father's publishing house, Cassell, and remained there until it was sold in 1966 following his father's death. Cassell's was the publisher for many major writers, but Flower's most important writer was Winston Churchill, editing and publishing his History of English Speaking People and the History of the Second World War. Bound in publisher's original green cloth with title and author in gilt to spine. Binding and text in near fine condition. In original dust jacket which is torn and tattered, and now protected by a mylar cover. 297 pages. POE/052913. (Inventory #: 26836)
$450.00 add to cart or Buy Direct from
Kelmscott Bookshop
Share this item

London : Jacob Tonson , 1714
(click for more details about An Account of Switzerland Written in the Year 1714)
View all from this seller>