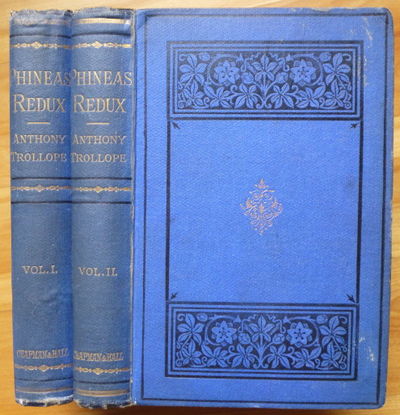 by Trollope, Anthony
1874. In Two Volumes. With Illustrations Engraved on Wood. London: Chapman and Hall, 1874. Original blue cloth decorated in black and gilt. First Edition of the fourth of Trollope's six "Palliser Novels," following CAN YOU FORGIVE HER?, PHINEAS FINN and THE EUSTACE DIAMONDS. It is primarily a continuation of PHINEAS FINN, with Phineas returning to London after seven years of exile in Ireland and the death of his wife. But the Palliser family also figures in the plot; so does Lizzie Eustace (and her new husband), fresh from her adventures in THE EUSTACE DIAMONDS. PHINEAS REDUX first appeared serially in The Graphic, 26 weekly instalments (July 1873 - January 1874), each with a Frank Holl illustration. This book edition, using only 24 of the illustrations, was published in two volumes (blue cloth) in December 1873. According to Sadleir, the publisher Routledge not only later issued C&H's unsold sheets (two-volumes-in-one), but also in 1874 printed up some additional copies that have continuous pagination. This copy is externally bright and is quite handsome in appearance; we would rate it very good-to-near-fine, as two endpapers are slightly cracked and there is minor wear at the extremities (mainly along the joints -- a common complaint for these volumes, as their spines are wider than their text blocks). In our experience this is a tough Trollope to find in original cloth, as the relative delicacy of the cloth has caused most copies to be rebound. Sadleir (TROLLOPE) 41. (Inventory #: 12431)
$975.00 add to cart or Buy Direct from
Sumner & Stillman
Share this item

THIS GUN FOR HIRE