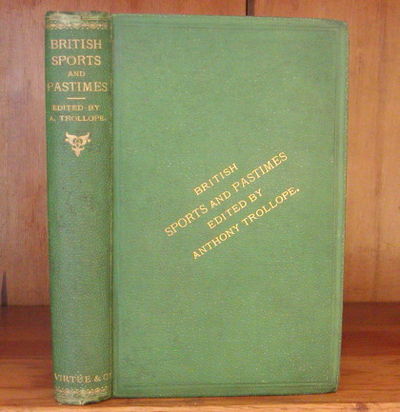 by Trollope, Anthony
1868. 1868. London: Virtue & Co., 1868. Original bright green cloth. First Edition of this collection of eight pieces on outdoor "sports and pastimes" -- namely horse-racing, hunting, shooting (birds), fishing, yachting, rowing, alpine climbing and cricket. All had appeared, between December 1867 and August 1868, in Saint Paul's Magazine, of which Trollope was editor. Trollope himself wrote only the piece "On Hunting" (as well as the Preface for this book); two of the others, "On Rowing" and "On Alpine Climbing," were by Leslie Stephen -- father of Virginia Woolf. "No other item in Trollopiana appears in so many different clothes without the indication of there having been earlier issues" [Sadleir]; this was due in part to the fact that Virtue & Co. soon went under and its books were bought out by Strahan & Co., which in turn was bought out by Daldy, Isbister & Co. This, however, is a copy from the first issue, with a Virtue & Co. title page dated 1868 and with "Virtue & Co." at the foot of the spine. Condition is very good to near-fine (very slight wear at the extremities, endpapers cracking). Sadleir (TROLLOPE) P4. (Inventory #: 12433)
$475.00 add to cart or Buy Direct from
Sumner & Stillman
Share this item