THE OREGON QUESTION EXAMINED, IN RESPECT TO FACTS AND THE LAW OF NATIONS. 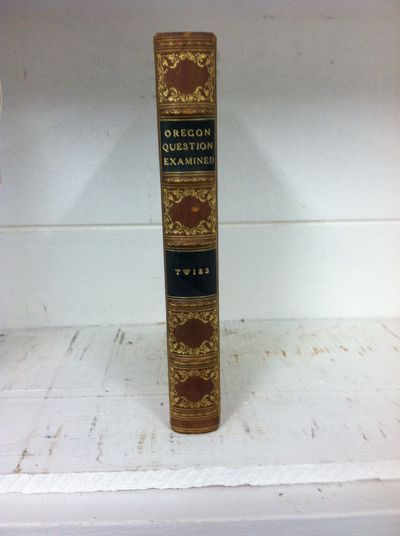 by Twiss, Travers.
London: Longman, 1846. First edition. [11], 391pp. Illus., 2 large folding maps. Contemp half leather with gold decorations on spine.( Two black panels gold stamped). The Frank Deering copy with his bookplate on inside front cover. Private collector's embossed stamp on title page One of the most important works on the subject, arguing in favor of the British claims, in an attempt to refute Greenhow's argument as stated in his 1840 "Memoir... on the Northwest Coast of America." In regard to lucidity and competent referral to authorities. Twiss is cited by some as the most adequate of the two works, though not necessarily the best historical account. Twiss includes some account of the voyages of Drake, Vancouver, Gray, Broughton, et al. The two maps aid the British view of the Oregon question. A large one of north America shows a boundary including all of Oregon, although the more detailed map rather belies the argument by being based on a U.S. survey, evidently by Hood. Howes T442 (aa). Cowan p.234. Wheat Transmississippi 530, 531. Sabin 97544. (Inventory #: 22281)
$950.00 add to cart Available from
Michael Ginsberg Books
Share this item
Michael Ginsberg Books Inc.
Offered by

LETTER FROM COL. BENTON TO THE PEOPLE OF MISSOURI CENTRAL NATIONAL HIGHWAY FROM THE MISSISSIPPI RIVER TO THE PACIFIC.

[St. Louis 1853]
(click for more details about LETTER FROM COL. BENTON TO THE PEOPLE OF MISSOURI CENTRAL NATIONAL HIGHWAY FROM THE MISSISSIPPI RIVER TO THE PACIFIC.)
View all from this seller>