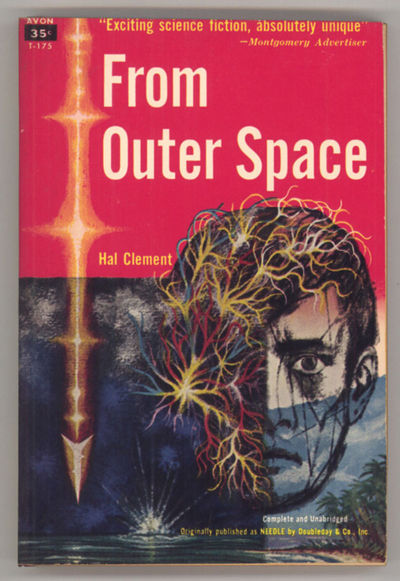 by Clement, Hal (pseudonym of Harry Clement Stubbs)
[New York]: Avon Publications, 1957. Small octavo, pictorial wrappers. First paperback edition. Avon Books T-175. First published in 1950 as NEEDLE. An early example of a theme that became popular in the 1950s: the apparently normal human being next to you might be a human body highjacked by an alien intelligence. In this story, two such 'highjackers' arrive on earth, one a detective, the other his quarry, who is planning monstrous crimes. They soon take over human bodies and resume their chase. Reginald 03080A. Slight spine roll, a nearly fine, unread copy. (#144011) (Inventory #: 144011)
$25.00 add to cart or Buy Direct from L.W. Currey
Share this item
L.W. Currey Inc.
Offered by