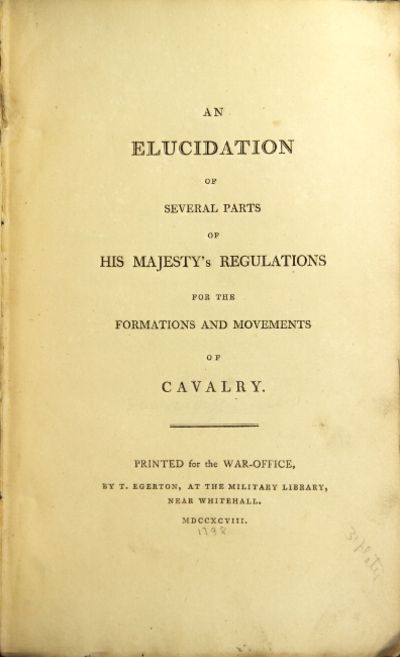 by Great Britain, Army
[London]: printed for the War Office by T. Egerton, 1798. First edition, 8vo, pp. [6], [iii]-iv, 5-54, without the final advertisement leaf; 31 hand-colored folding plates of lines of battle, troop movements, attacks, etc.; contemporary marbled boards, neatly rebacked in beige cloth, green cloth label lettered in gilt on spine; first gathering loosening, else generally a very good, sound copy. Ex-Royal United Service Institution, with their engraved bookplate, and with a small release stamp; no other markings. The text is in 2 parts, the second part, with continuous pagination and register, with the title, On Movements and Attacks; with Reference to the Appendix in His Majesty's Regulations for Cavalry," and the plates are divided 12 and 19 respectively. The text is signed at the end: J. G. L. M. A second edition with only 19 plates appeared the following year. OCLC and ESTC locate a total of 9 copies, only Yale, Society of the Cincinnati, and the U.S. Military Academy in the U.S. (Inventory #: 28423)
$977.50 add to cart or Buy Direct from
Rulon-Miller Books
Share this item