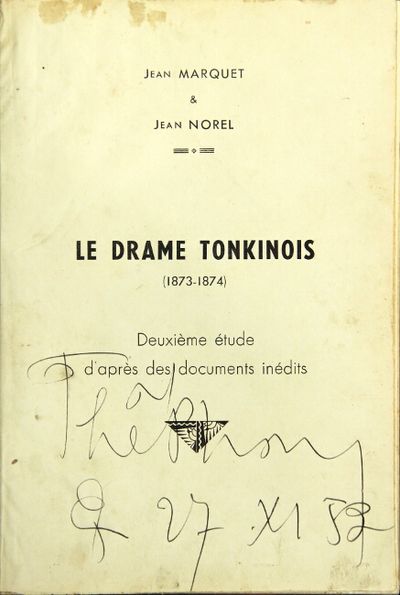 by Marquet, Jean, & Jean Norel
[Hanoi]: Impr. d'Extrême-Orient, 1947. Small folio, pp. [3]-204, portrait, 2 maps, village plan; very good in later native half brown calf, gilt lettered direct on spine; very good. The writer The Phong's copy, signed and dated by him in 1952 on the title page and also p. [45], and p. 57. Originally published in the Bulletin de la Société des Études Indochinoises, nouvelle série, tom. 12, no. 3-4 in 1938. The Phong (b. 1932) started writing in Hanoi in 1952 "in the first days of the Vietminh." In 1953 he embarked on a career of journalism. He moved to Saigon before the fall of Dien Bien Phu in 1954 where he wrote film reviews and other material on a contractual basis. He is the author of over 40 books, among them three novels (2 written in Hanoi, and another in Saigon), and in September of 1964 he became a press officer of the Minister of Information which brought him in contact with many important people in both the literary as well as the political scene. Not found in OCLC. (Inventory #: 35845)
$862.50 add to cart or Buy Direct from
Rulon-Miller Books
Share this item