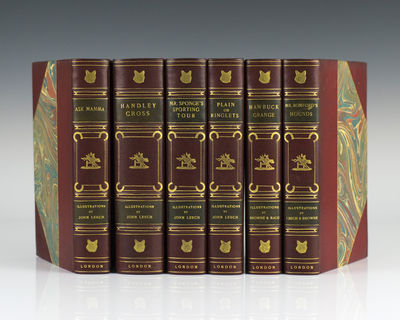 by Surtees, Robert Smith; Illustrations by John Leech & H.K. Browne
London: Bradbury Agnew & Company. Octavo, 6 volumes. Three quarters red leather over marbled boards, gilt titles and tooling to the spine, top edge gilt, gilt lined, marbled endpapers, colored frontispiece to each volume, as well as the title page. Illustrations by John Leech and H.K. Browne. In near fine condition. Surtees' was arguably a match for Dickens in the field of social observation, whilst surpassing him as an observer of the natural world: with warmth and humor Surtees captured an era and a way of life that reached its zenith during Queen Victoria's reign. (Inventory #: 3225)
$1,250.00 add to cart or Buy Direct from
Raptis Rare Books
Share this item