Caste and Ecology in the Social Insects. 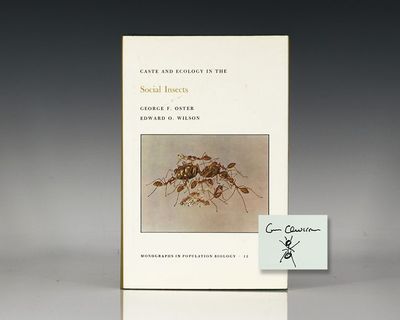 by Wilson, Edward O. & George F. Oster
Princeton: Princeton University Press, 1979. First edition of this important work by Wilson and Oster. Octavo, original cloth, illustrated. Signed by Edward O. Wilson on the title page with a drawing on an ant. Fine in a near fine dust jacket. In this pathbreaking and far-reaching work George Oster and Edward Wilson provide the first fully developed theory of caste evolution among the social insects. Furthermore, in studying the effects of natural selection in generally increasing the insects' ergonomic efficiency, they go beyond the concentration of previous researchers on the physiological mechanisms of the insects and turn our attention instead to the scale and efficiency of the insects' division of labor. (Inventory #: 3214)
$375.00 add to cart or Buy Direct from
Raptis Rare Books
Share this item