THE VICAR OF WAKEFIELD: A TALE. SUPPOSED TO BE WRITTEN BY HIMSELF 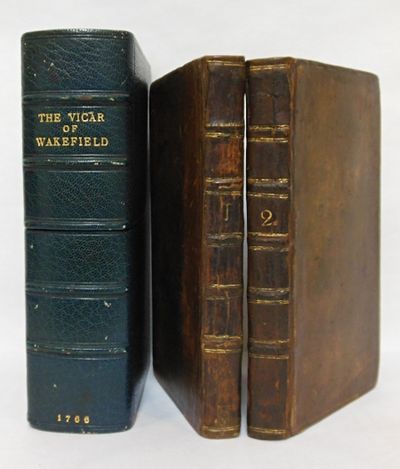 by [Goldsmith, Oliver]
Salisbury: Printed by B. Collins, for F. Newbery, 1766. Two volumes. [4],214,[2 (blank)];[2],223,[1]pp. 12mo. Contemporary calf, rebacked to style with the original backstrips laid down. Contemporary bookplate in first volume (Walbancke); heavy offsetting from calf turn- ins to margins of endsheets, prelims and terminal leaves, upper quarter portion of binder's free endsheet in second volume torn away, a few signatures starting slightly, but a good set. Enclosed in a full morocco solander case by Riviere. First edition. The edition was burdened with a number of typographic errors or omissions (such as the omission of the word 'husband' in the first line of I:15, the misspelling 'Waekcfield' in the headline of II:95, etc), the most significant of which have been sorted into four variants. This set is of the second variant, with no catchword on I:213, with the corrected catchword on II:39, and page 159 correctly numbered. This edition printed in Salisbury precedes the first London printing by slightly over two months, although publication was some four years after the rights to the manuscript were sold to the publisher by Samuel Johnson on Goldsmith's behalf. The delay has been ascribed, variously, to Goldsmith's revisions, or to the publishers' reticence to commit to printing the work until Goldsmith had established a reputation. Over the next century, it became one of the most popular novels of its generation. GROLIER ENGLISH HUNDRED 53. ROTHSCHILD 1028. SCOTT 173ff. ESTC T146176. BLOCK, p.89. NCBEL II:1197. (Inventory #: WRCLIT69222)
$5,850.00 add to cart or Buy Direct from
William Reese Co. - Literature
Share this item