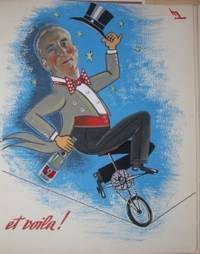 by LeConte, Paul, directeur. Also Dancette, Truan, Picherit, Neven, Petrus, Petan, etc. (employees of Dupuy)
1951. Cloth. Near Fine/Very Good. Unique collection of 74 watercolors, ink drawings, collages and mixed media playful caricatures of a Parisian advertising executive, presumably by members of his creative staff. Most of the individual send-ups are imaginative and amusing; the cumulative effect, though, is truly extraordinary in the sheer variety and range of the works. As a whole the album honors not merely a particular individual, but the human creative spirit! Thus we have a Soviet Dupuy, an angelic Dupuy, an overworked Dupuy, a gaucho Dupuy, a scout Dupuy, a wandering eye Dupuy, a lolling Dupuy; he is depicted as a painter, a mariner, a general, and on and on. These various roles assigned to him scarcely suggest the richness of ideas of the particular artwork. In just one drawing, showing the executive in a bathtub, we see floating atop the water the names of products, presumably ones he promoted, and other names spraying over him from the showerhead. Dupuy, based on the wealth of images we have of him, was a quintessential Frenchman in his appearance; we can also surmise that he was beloved, if not also feared a bit, and certainly, he had to have had a charisma, for few businessmen have probably ever received such an effortful and remarkable tribute as represented by this manuscript. The folio measures 33 by 28 cm, 13 by 11 inches. With a dust jacket that at its center has a cameo relief of Dupuy himself. The DJ, now protected with mylar, has use creases, minor spotting and toning. The leaves are all clean, and the album is tight. (Inventory #: 002606)
$6,250.00 add to cart Available from
White Fox Rare Books & Antiques
Share this item
White Fox Rare Books and Antiques
Offered by