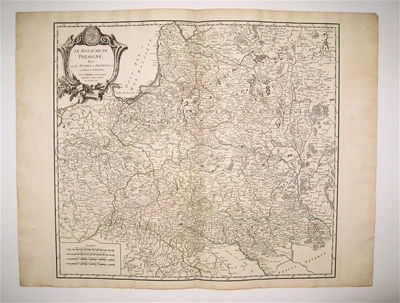 by ROBERT DE VAUGONDY, Gilles
Paris: Boudet, 1752. unbound. Map. Engraving with hand outline color, uncolored cartouche. Image measures 17 x 19". This very detailed map depicts Poland as part of the Polish-Lithuanian Commonwealth and includes Lithuania, Ukraine, and East Prussia. All regions are labeled with cities, rivers, lakes, and forests. At the upper left is an elaborate title cartouche featuring the Polish cost of arms and a copy of the "Pacta conventa," a contractual agreement between the nobility of the Polish-Lithuanian Commonwealth and a newly-elected king, which endured from from 1573 to 1764. The map was published in Robert de Vaugondy's "Atlas Portatif Universel." It is in very good condition with wide margins. Some small tears in margins not affecting the image. Gilles Robert de Vaugondy (1688-1766) was an important French mapmaker during the 18th century. His "Atlas Universel" was one of the most significant atlases of the period, integrating older sources with more modern surveyed maps in order to convey correct geographical and political information. This map of Poland demonstrates his commitment to detail. (Inventory #: 243054)
$450.00 add to cart or Buy Direct from
Argosy Book Store
Share this item