GET OUT OF MY SKY. THE SHORT NOVELS OF SCIENCE FICTION .. 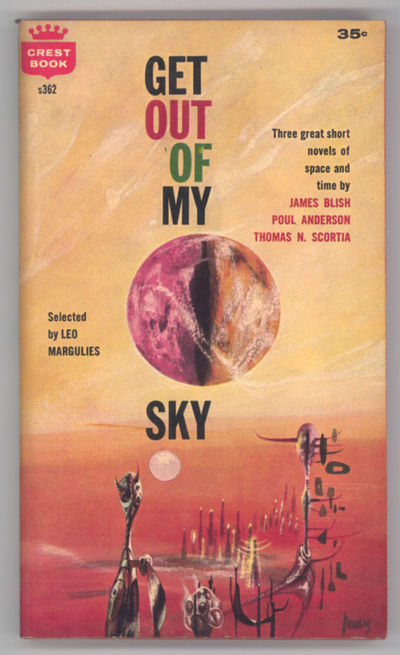 by Margulies, Leo (editor)
Greenwich, Conn.: Crest Book Fawcett Publications, 1960. Small octavo, pictorial wrappers. First edition. Crest Book s362. Collects three science fiction novellas, "Get Out of My Sky" by James Blish, "Sister Planet" by Poul Anderson, and "Alien Night" by Thomas N. Scortia. "Sister Planet" concerns the terrible price of terraforming Venus. In "Alien Night" immortal time travelers from a dystopian future in which the few remaining humans on Earth are ruled by alien invaders return to a static utopia of zombie-like complacent humans to stimulate their survival instinct and curiosity so they will become a space going race and defeat the aliens when they arrive. Reginald 09665. Touch of wear to spine ends, a bright, very good, unread copy. Cover art by Richard Powers. (#143867) (Inventory #: 143867)
$25.00 add to cart or Buy Direct from L.W. Currey
Share this item
L.W. Currey Inc.
Offered by