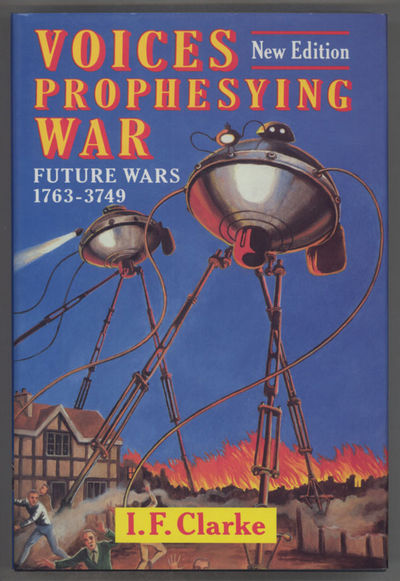 by Clarke, I[gnatius] F[rederick]
Oxford, New York: Oxford University Press, 1992. Octavo, pp. [1-2] [i-ix] x [xi-xii] [1] 2-268 [269-274: blank] [note: first and last three leaves are blanks], illustrations, boards. Second edition. The standard history of future war fiction. This new edition is a complete revision of the 1966 edition with new material added, the fifth chapter largely rewritten, and a new sixth chapter that surveys the many changes in this fiction during the last three decades. The "Checklist of Imaginary Wars, 1763-1990," pages [224]-262, provides a comprehensive chronological list of English, French, and German future war fiction published through 1990. Clarke's non-annotated list has imported most of the relevant titles (along with at least one typo common to both) from John Newman and Michael Unworth's FUTURE WAR NOVELS: AN ANNOTATED BIBLIOGRAPHY OF WORKS IN ENGLISH PUBLISHED SINCE 1946 (1984) and is by far the more extensive checklist, but researchers may wish to consult the latter for its descriptive annotations averaging 150 words in length. Anatomy of Wonder (1995) 8-41. See Burgess, Reference Guide to Science Fiction, Fantasy, and Horror 213. A fine copy in fine dust jacket. (#144693) (Inventory #: 144693)
$35.00 add to cart or Buy Direct from L.W. Currey
Share this item
L.W. Currey Inc.
Offered by

PATHS OF GLORY: A NEW WAY WITH WAR