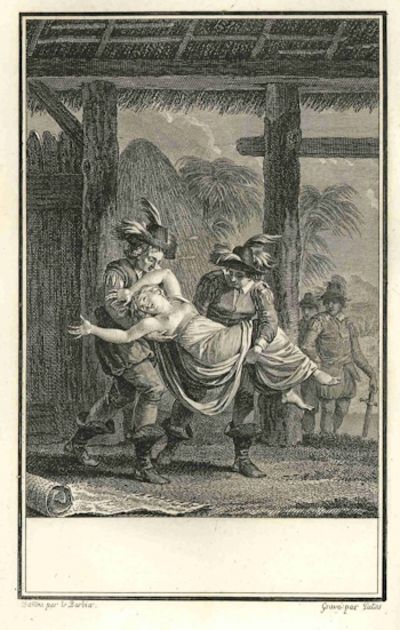 by Graffigny, Francoise de
Paris: L'Imprimerie de Migneret, 1797. 487,[1]pp. Large octavo (230 x 160 mm). Contemporary tree calf, spine and edges decorated in gilt, a.e.g. Engraved portrait and 6 plates. A bit of dusting and foxing to prelims and terminal leaves; a bit of marginal spotting/foxing to plates and tissue guards; lower extremities and forecorners worn, with shallow loss at toe of spine, otherwise a very good copy. First edition in this format, with the text in parallel Italian and French. Illustrated with plates engraved by Choffard, Halbou, Ingouf, Patas, Gaucher and Lingée after designs by Le Barbier. The portrait was engraved by Gaucher after La Tour. This copy is from the deluxe issue on large vélin, with the plates before letters. Graffigny's epistolary novel was first published anonymously in 1747, represented as a sequence of letters written by a young Incan princess, Zilia, who was abducted by the Spanish during the conquest, and then after being rescued by French sailors, is introduced into French society. Graffigny was prompted to undertake the work after seeing a performance of Voltaire's ALZIRE, and relied on her reading of Garcilaso de la Vega for historical context. In fact, the cumulative result is a satirical view of French life, particularly the situation of French women, as seen by a complete outsider. The novel proved highly popular, and went through many editions, with a revised text appearing in 1752, and was the catalyst for sequels and pastiches by other hands. COHEN & DE RICCI, p.447. BRUNET II:1690. (Inventory #: WRCLIT69354)
$2,500.00 add to cart or Buy Direct from
William Reese Co. - Literature
Share this item

THE ATHANASIAN CREED TO BE RETAINED IN ITS INTEGRITY: AND WHY...

Oxford & London : James Parker and Co. , 1872
(click for more details about THE ATHANASIAN CREED TO BE RETAINED IN ITS INTEGRITY: AND WHY...)

New York : Published by William Durell and Co. , 1813
(click for more details about THE WORKS OF THE REV. JONATHAN SWIFT, D.D. DEAN OF ST. PATRICK'S, DUBLIN ... WITH NOTES, HISTORICAL AND CRITICAL ..)
View all from this seller>