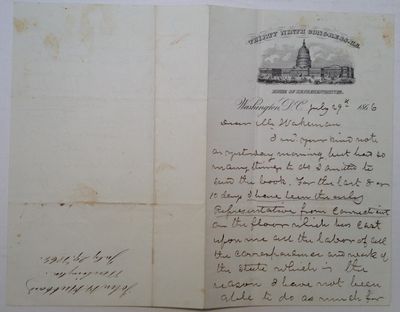 by HUBBARD, John Henry (1805 - 1872)
Washington, D.C., 1866. unbound. 3 pages, each two-page fold-out measuring 7.75 x 10 inches, Washington, D.C., July 29, 1866, describing his ordeal in fighting the Radical Republicans. In part: "...For the last 8 or 10 days I have been the only Representative from Connecticut on the floor which has cast upon me all the labor of all the correspondence and work of the State - which is the reason I have not been able to do as much for my immediate constituents. The last 10 days have been the most important of the session and I have been left entirely alone. I confess to you I feel abused by it. I have worked by night and by day and am tired..." Note: The Radical Republicans saw to it that Hubbard was not re-nominated for his Congressional seat in 1867, thus depriving him of any participation in the Johnson Impeachment Trial and Reconstruction. Light stains on the upper right corner of the first page; still very good condition. Connecticut Republican Congressman during the Civil War who was in full sympathy with President Lincoln's war policies. (Inventory #: 243164)
$250.00 add to cart or Buy Direct from
Argosy Book Store
Share this item