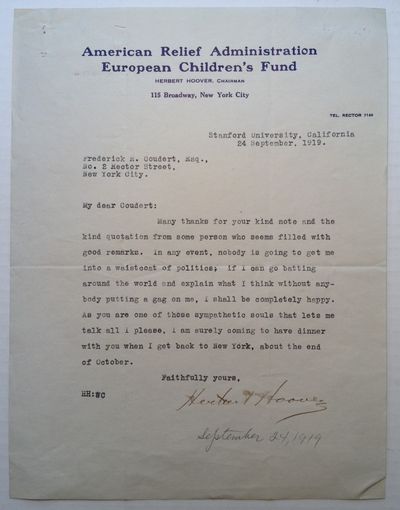 by HOOVER, Herbert (1874 - 1964)
New York City, 1919. unbound. 1 page, 10.5 x 8 inches, on the very scarce "American Relief Administration European Children's Fund" letterhead, 115 Broadway, New York City, September 24, 1919. Written to powerful New York attorney and political power broker Frederic R. Coudert, disavowing a future in politics, in part: "...Nobody is going to get me into a waistcoat of politics; if I can go batting around the world and explain what I think without anybody putting a gag on me, I shall be completely happy..." Note that Hoover never graduated from High School, but was enrolled as part of the very first class at Stamford University in 1891, despite flunking all of his entrance exams. Nine years after he wrote this letter, he captured the Presidency having no previous elected office experience. Staple holes in the upper left corner, several folds, and light smudging on part of the signature. Very good(-) condition. (Inventory #: 243153)
$350.00 add to cart or Buy Direct from
Argosy Book Store
Share this item