Original German A1 Poster for TRAUMSTADT 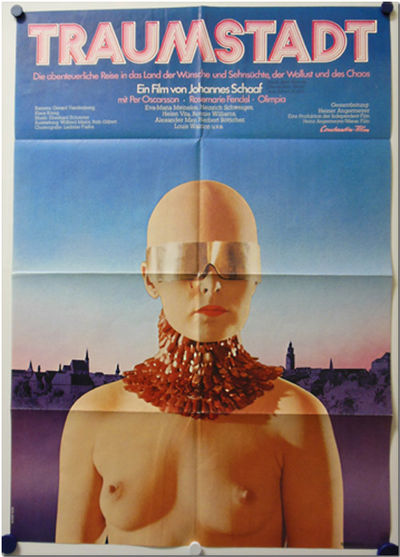 by [Kubin, Alfred (sourcework)]: Schaaf, Johannes, et al [screenwriters]
[West Germany]: Constantin Film, 1973. Folio (33" x 23" [84 x 58 cm]). Folded, as issued, else about fine. An A1 exhibition poster for the updated film adaptation of Alfred Kubin's 1909 dystopian novel, SIE ANDERE SEITE. The adaptation was Johannes Schaaf (who also directed), Russell Parker, and Rosmarie Fendel, who also starred, alongside Per Oscarsson, Olimpia, Eva-Maria Meineke, Heinrich Schweiger, Helen Vita, Ronnie Williams, Alexander May, Herbert Botticher, and Louis Waldon. The film was released in the U.S. as DREAM CITY in 1976. The poster design does not partake of Kubin's own well-known artwork, but prominently features a nude female figure in mirrorshades against the backdrop of a city. (Inventory #: WRCLIT69365)
$55.00 add to cart or Buy Direct from
William Reese Co. - Literature
Share this item

New York : White, Stokes & Allen , 1886.
(click for more details about ETCHING IN AMERICA WITH LISTS OF AMERICAN ETCHERS AND NOTABLE COLLECTIONS OF PRINTS)

London : Adam and Charles Black , 1912.
(click for more details about BURMA PAINTED & DESCRIBED BY ...)
View all from this seller>