AN ACCOUNT OF THE GRAND MUSICAL FESTIVAL, HELD IN SEPTEMBER, 1823, IN THE CATHEDRAL CHURCH OF YORK ... TO WHICH IS PREFIXED, A SKETCH OF THE RISE AND PROGRESS OF MUSICAL FESTIVALS IN GREAT BRITAIN; WITH BIOGRAPHICAL AND HISTORICAL NOTES 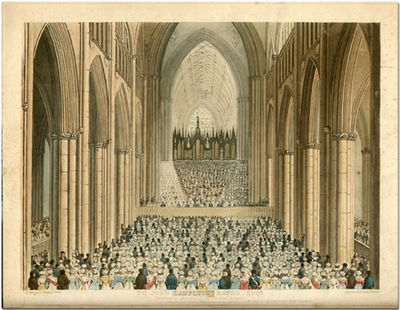 by [Festivals]: Crosse, John
York: Printed and Sold by John Wolstenholme, 1825. vii,[1],436,xxvi,[2]pp. Quarto (300 x 235 mm). Modern half-calf, gilt label, and marbled boards. Colored frontis, one colored and two tinted plans, plus a large folding plan. Some offsetting from the plates and occasional foxing, folding plan somewhat foxed (but intact); a good, sound copy. First edition of this account of the festival hosted to benefit the York County Hospital and the General Infirmaries of Leeds, Hull and Sheffield. The prefatory essay, which extends to some 125 pages, is of particular significance as it consists of an historical account of Festivals in Great Britain up to the year 1823. The terminal leaf consists of an extensive list of additions and corrections, with an advert for the second Yorkshire Festival. Appendices relate to organizational matters, as well as a history of the "noblest of all instruments," the Organ. The pictorial plates were engraved by John Browne after drawings by Edward Finden - the frontis has a pasted cancel slip correcting the name of the dedicatee. (Inventory #: WRCLIT69378)
$500.00 add to cart or Buy Direct from
William Reese Co. - Literature
Share this item

MEMOIRS OF AN AESTHETE

[Harmondsworth, UK] : Penguin Books , 1970
(click for more details about POEM INTO POEM WORLD POETRY IN MODERN VERSE TRANSLATION)
View all from this seller>