Pale Fire A Novel. [and] Pale Fire A poem in four cantos from the novel of the same title. 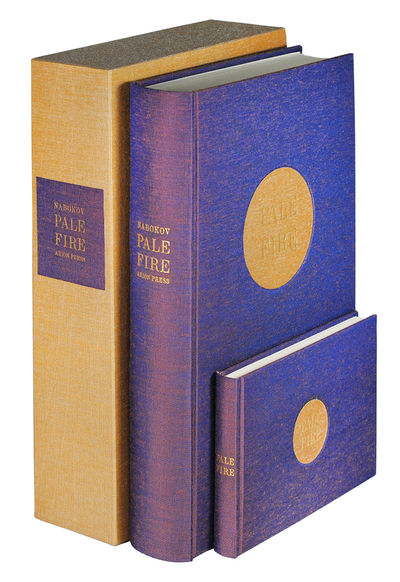 by Nabokov, Vladimir. Arion Press.
2 vols. San Francisco: Arion Press, 1994. 2 vols, large thick 8vo and oblong 12mo, 284, (1, bio. and 1, colophon); 81, (1, colophon)pp. Original purple silk, inset gold cloth lettering disks, brown slipcase. As new. § Limited to 200 copies, this is a brilliantly creative presentation of Nabokov’s two fictional authors, the poet John Shade and the professor Charles Kinbote. Shade is the author of "Pale Fire" a poem which Kinbote explicates in a commentary. They create an interwoven story in which the lives of poet and critic are interlinked. Using internal evidence, Hoyem has established the lineation of the poem and recreated the set of index cards that the novel describes as Shade's manuscript. Rare in commerce and at auction, copies seldom occur for sale. (Inventory #: 105233)
$2,750.00 add to cart or Buy Direct from
John Windle, Bookseller
Share this item

2020 Vision: Nineteen Wood Engravers, One Collector, and the Artists Who Inspired Them.

Whittington, UK : Nomad Letterpress and The Society of Wood Engravers , 2020
(click for more details about 2020 Vision: Nineteen Wood Engravers, One Collector, and the Artists Who Inspired Them.)

The Marriage Of Heaven And Hell.

[London : John Camden Hotten , 1868]
(click for more details about The Marriage Of Heaven And Hell.)
View all from this seller>