All the Talents! A satirical poem, in three dialogues. By Polypus. Fourth edition. 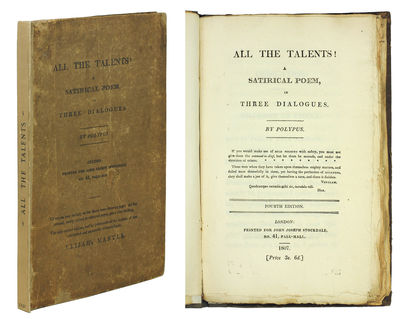 by [Barrett, Eaton Stannard]
8vo. London: John Joseph Stockdale, 1807. 8vo, xvi,81, (3, ads)pp. Original printed boards, rebacked. The upper cover printed with the title of the above work together with an advert for another Stockdale publication (Elijah’s Mantle), and further titles listed on the lower cover. § Fourth edition, printed in the same year as the first, this is Barrett's best-known political satire ridiculing the contemporary Whig administration, the popularity of this title caused the printing of at least 20 editions some of the later of which had a frontispiece by Rowlandson. (Inventory #: 105244)
$50.00 add to cart or Buy Direct from
John Windle, Bookseller
Share this item