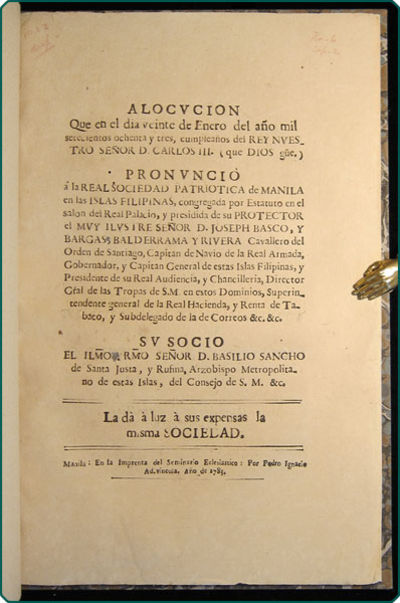 After consecration and service in Spain, Sancho de Santa Justa arrived in Manila in 1767 to take up his duties as archbishop, which included overseeing the expulsion of the Jesuits. He was a native of Aragon and a member of the Society of Scholarum Piarum. In this address on the occasion of Charles III's 67th birthday, he expresses himself no friend of many of the Enlightenment's ideas but a staunch supporter of the King, his economic policies, and especially of the newly instituted practice of free commerce in the Spanish empire. On the other hand, he rails against England, its foreign commercial practices, and its ascension as a maritime powerhouse.
As the title states, this was pronounced before "la Real Sociedad Patriotica de Manila." That august body was "congregada por estatuto en el salon del Real Palacio, y presidida de su protector el muy ilustre señor D. Joseph Basco, y Bargas, Balderrama y Rivera cavallero del Orden de Santiago, capitan de navio de la real armada, gobernador, y capitan general de estas Islas Filipinas, y presidente de su real audiencia, y chancilleria, director g[ene]r[a]l de las tropas de S.M. en estos dominios, superintendente general de la Real Hacienda, y Renta de Tabaco, y subdelegado de la de Correos &c. &c."
The work is printed on "rice paper" (i.e., Asian paper probably from the mulberry tree) as was common in Manila during the period to ca. 1820. The typography is definitely provincial and plain, using only one decorative woodcut initial and no ornamentation on the title-page. The type is roman in a variety of sizes with a practice of using all capitals for emphasis.
The press on which this work was printed had been that of the Jesuits until Archbishop Sancho de Santa Justa carried out the king's order and expelled them; he then appropriated the press for his private use, as here. What had been only the fourth press to operate in the Islands, now with a new name, became the fifth.
Searches of NUC, WorldCat, and COPAC locate only six libraries worldwide reporting ownership: three in the U.S. {John Carter Brown, Indiana University, Newberry) one in the U.K. (Briish Library), one in Spain (national library), one in the Philippines (national library).

The foundling; or, the history of Lucius Stanhope.

York : Printed by J. Kendrew , [ca. 1825]
(click for more details about The foundling; or, the history of Lucius Stanhope.)
View all from this seller>