A Critical and Philosophical Commentary on Mr. Pope's Essay on Man . . 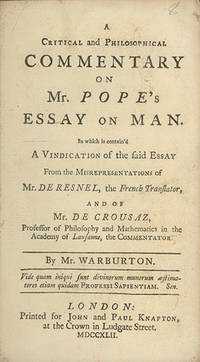 by [POPE, ALEXANDER]. Warburton, William
London: Printed for John and Paul Knapton, 1742, 1742. First edition. ESTC T132396; NCBEL II, 1870. Minor nicks in the edges of a few preliminary leaves; very good copy.. Small 8vo, contemporary calf skillfully rebacked, red morocco spine label, gilt lettering. Â¶ A spirited defense by William Warburton (1698-1779) of Alexander Pope's famous poem Essay on Man. Warburton first published a similar work on the same subject entitled Vindication of Mr. Pope's Essay on Man (1740), but rewrote it so extensively for this edition that it really is a new work, as NCBEL recognizes it. This edition also contains a lengthy dedication to philanthropist Ralph Allen and a preface that begins "There are two sorts of Writers, I mean the Bigot and the Free-Thinker, that every Honest Man in his Heart esteems no better then the Pests of Society, as they are manifestly the bane of Literature and Religion." (Inventory #: 23250)
$250.00 add to cart or Buy Direct from
Brick Row Book Shop
Share this item

The Tragedy of Richard the Third: With the Landing of Earle Richmond, and the Battell at Bosworth Field. Woodcuts in color by Mary Grabhorn

(San Francisco:) The Grabhorn Press, 1953 , 1953
(click for more details about The Tragedy of Richard the Third: With the Landing of Earle Richmond, and the Battell at Bosworth Field. Woodcuts in color by Mary Grabhorn)
View all from this seller>