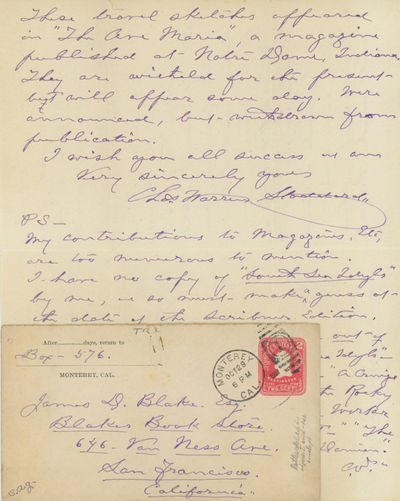 by STODDARD, CHARLES WARREN
In fine condition, with the original postmarked envelope.. Single 10 x 8 inch sheet, folded to make four pages, approximately 275 words. Stoddard writes in response to an inquiry from James Blake of Blake's Book Store about his various publications. "Dear Mr. Blake / It is perhaps interesting to note that simultaneously with the first Boston edition of South Sea Idyls the book was issued by Chatto and Windus of London, under the title of Summer Cruising in the South Seas. Illustrated. Chatto now publishes it under the title of South Sea Idylls, uniform with his edition of The Island of Tranquil Delights . . . The Dream Lady is the title sketch of a vol of sketches to be published next year '08. Friends of my Youth, another vol. which has appeared in the Nation Magazine of Boston, is to contain personal sketches of old friends, now dead, with letters from them . . . The travel sketches appeared in The Ave Maria, a magazine published at Notre Dame, Indiana. They are withheld for the present but will appear some day. Were announced, but withdrawn from publication . . . My contributions to magazines, etc., are too numerous to mention . . . I think all my books are out of print, save only South Sea Idyls . . . I wish you all success and am Very Sincerely Yours, Chas. Warren Stoddard." (Inventory #: 25298)
$600.00 add to cart or Buy Direct from
Brick Row Book Shop
Share this item

A Comtist Lover and Other Studies

Letters of Shahcoolen, A Hindu Philosopher, Residing in Philadelphia; To His Friend El Hassan, an Inhabitant of Delhi

Boston: Printed by Russell and Cutler, 1802 , 1802
(click for more details about Letters of Shahcoolen, A Hindu Philosopher, Residing in Philadelphia; To His Friend El Hassan, an Inhabitant of Delhi)
View all from this seller>