Domestic Manners of the Americans . . . Complete in One Volume 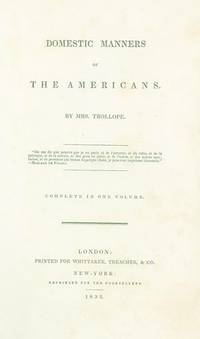 by TROLLOPE, FRANCES
London: Printed for Whittaker, Treacher; New York: Reprinted for the Booksellers, 1832, 1832. First American edition. NCBEL III, 769; Robinson, pages 197-98; Sabin 97028; American Imprints 15041; Clark, Travels in the Old South, vol. 3, 112; Colbert; ODNB. Some foxing; binding a little worn and stained; spine a bit faded; one signature starting; very good copy.. Large 12mo, original blue linen and printed paper label. Frontispiece and seven lithographed plates after drawings by Auguste Hervieu. Frances Trollope (1780-1863) traveled to America in 1827 with several children in tow to assist her friend Frances Wright at her utopian colony in western Tennessee. She was repelled by what she experienced there and moved on to Cincinnati, which she used as a home base for her travels in the States over the next few years, all of which she wrote about upon her return to England in Domestic Manners of the Americans, her first book. It was immediately one of the most controversial works written about America: "Although she recognized the material superiority of the American economic system, she blamed the forces of democracy for lowering intellectual standards to a level of conformity and mediocrity. The book exposed abuses of slavery and domestic service, the emotional hypocrisies of religious revival meetings, the delicate posturings of American women, and their insignificant lifestyles" - ODND. Though Domestic Manners was bitterly criticized in America, in England it was popular, and its success encouraged Frances Trollope to become a travel writer. (Inventory #: 25352)
$350.00 add to cart or Buy Direct from
Brick Row Book Shop
Share this item

The Life and Adventures of Michael Armstrong, The Factory Boy

London: Henry Colburn, 1840 , 1840
(click for more details about The Life and Adventures of Michael Armstrong, The Factory Boy)
View all from this seller>