A Treatise of Morall Philosophy: Wherein is Contayned the Lives and Answers, Witty Sayings, Worthy Sentences, Wise and Excellent Councels, Precepts, Proverbs, and Parables, of Philosophers, Orators, Emperors, and Kings . . 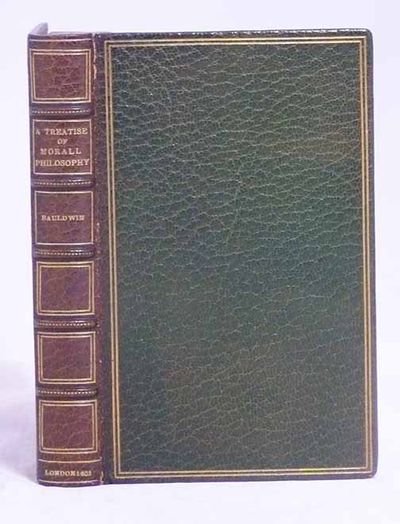 by BALDWIN, WILLIAM
London: Printed by Richard Bishop, 1631, 1631. About the 25th edition, and the last 17th century edition. Wing B-547; NCBEL I, 1083. Paper a little browned; edges slightly rubbed; very good copy.. Small 8vo, modern dark green morocco by MacDonald, gilt rules and lettering, a.e.g. A very popular mid-Tudor work on moral philosophy by the poet, satirist and printer William Baldwin, "a literary innovator whose works influenced writers as historically distant and as thematically diverse as Thomas Nashe, Edmund Spenser, and Alexander Pope" - DNB. A Treatise was first published in 1547 and saw almost as many editions in the 16th century as the Bible. "In his Treatise, Baldwin [adapted] the precepts of the philosophers to the practical needs of would-be governors and gentlemen with out robbing them of the mystique - the impression they gave of skimming the surface of unplumbed esoteric depths - that made them attractive." See R. W. Maslen, "William Baldwin and the Politics of Pseudo-Philosophy" in Studies in Philology, Vol. 97, No. 1. Ownership signature on the verso of the title-page, dated 1663, and again on the first page of text. (Inventory #: 25578)
$2,500.00 add to cart or Buy Direct from
Brick Row Book Shop
Share this item