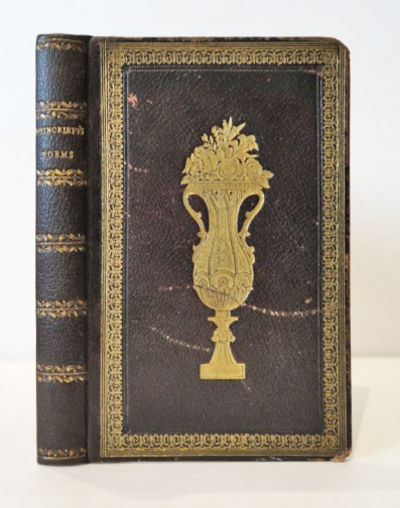 by MONCRIEFF, WILLIAM THOMAS
Lambeth: Printed (For Private Distribution Only) at the Author's Private Press, 1829, 1829. First edition. NCBEL III, 1134. Edges rubbed; very good copy.. Small 8vo, contemporary black morocco, skillfully rebacked, gilt decorations and lettering, a.e.g. Frontis portrait after a portrait by R. Reading. Bound in before the portrait is a ten-page manuscript of Monceieff's poem "An Allegory," signed and dated September 20, 1845. Â¶ A collection of about 100 poems in several forms by the playwright, theatre manager, miscellaneous writer and apparently occasional printer, as well. Moncrieff (1794-1857) was a self-described "hack," and a prolific one, who specialized in adapting novels for the stage and who made what little money he could in theatre and literary work of any kind. A few years after this volume was published, Moncrieff began struggling with progressive blindness. Poems contains sonnets, songs, ballads, epigrams and madrigals, mostly on the subject of unrequited love, something at which Moncrieff appears to have had a great deal of experience. Â¶ At the foot of the final page of text is the imprint "W. T. Moncrieff, Typ. Saville House, Lamberth." Â¶ Inscribed at the head of the title-page "To J. Miles Esqr / With the Author's best acknowledgements." The manuscript poems go into length about the aging process and loss of sight and is certainly in part autobiographical. (Inventory #: 25070)
$850.00 add to cart or Buy Direct from
Brick Row Book Shop
Share this item

A Comtist Lover and Other Studies

Letters of Shahcoolen, A Hindu Philosopher, Residing in Philadelphia; To His Friend El Hassan, an Inhabitant of Delhi

Boston: Printed by Russell and Cutler, 1802 , 1802
(click for more details about Letters of Shahcoolen, A Hindu Philosopher, Residing in Philadelphia; To His Friend El Hassan, an Inhabitant of Delhi)
View all from this seller>