THE GOLDEN AGE: A ROMANCE OF THE FAR FUTURE 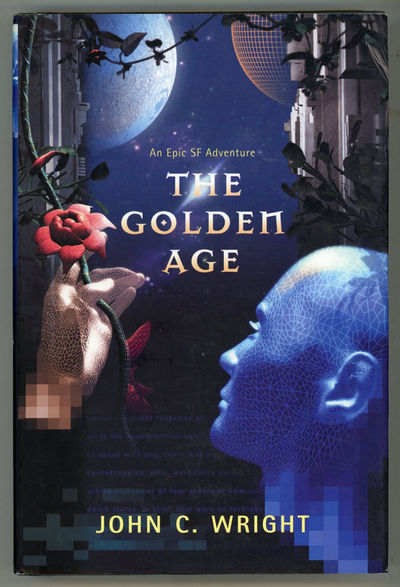 by Wright, John C.
New York: Tor, 2002. Octavo, boards. First edition. First book of "The Golden Age" trilogy. Far-future SF adventure novel, about a man's quest to recover his memory, and uncover why it was taken. "Future interplanetary flawed utopia; the utopia is not what it appears to be in that it suppresses dissent ... The trilogy concerns the original utopia, a rebellion against it, and the temporary merging of all sentient life into a supermind." - Sargent, British and American Utopian Literature, 1986-2009. The Golden Age sequence -- comprising THE GOLDEN AGE: A ROMANCE OF THE FAR FUTURE (2002), THE PHOENIX EXULTANT; OR, DISPOSSESSED IN UTOPIA (2003) and THE GOLDEN TRANSCENDENCE OR, THE LAST OF THE MASQUERADE (2004), all three assembled as THE GOLDEN AGE TRILOGY (2004) -- is his most successful completed work to date. Set in the moderately far future, when the solar system seems to have been transfigured into an environment hospitable to Homo sapiens (and that species' genetically engineered descendants), godlike immortals and machine-life including supervisory AIs, it follows the course of the amnesiac Phaethon in a fantastic voyage from Neptune inwards -- with some attention paid to Saturn, which Ecology faddists are seeking to preserve from industrial exploitation - as he seeks to preserve the kind of universe where he can continue to thrive against the conspiratorial persecutions mounted by those who think differently, and therefore wrongly, about the nature of the universe. The series has been misdescribed as hard SF." - John Clute, SFE (online). The author's first novel. Anatomy or Wonder (2004) II-1287. Broderick and Di Filippo, Science Fiction: The 101 Best Novels, 1985-2010 #71. A fine copy in fine dust jacket. (#145007) (Inventory #: 145007)
$45.00 add to cart or Buy Direct from L.W. Currey
Share this item
L.W. Currey Inc.
Offered by