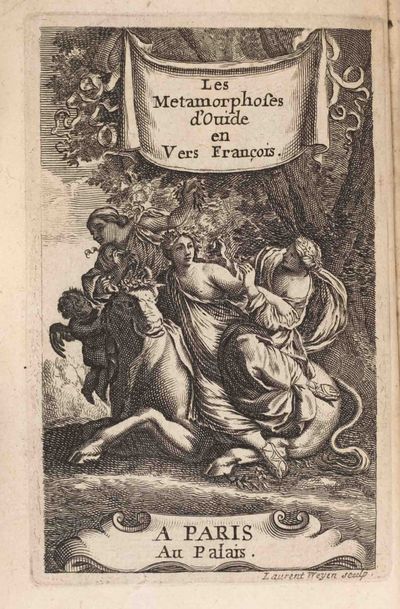 Thomas Corneille (1625-1709): playwright, poet. To distinguish himself from his brother Pierre Corneille, Thomas was known as “Monsieur Corneille.” He was one of the leading authors who began to produce plays during the Fronde and brought out even more plays than his brother Pierre: thirty-eight plays composed alone or in collaboration. His first tragedy, Timocrate (1656), helped to restore the genre to popularity after the troubles of the Fronde. Although he was more attractive in manner and in conversation than Pierre, he lacked Pierre's genius. Still, "with Quinault he filled the interval in the history of the French drama between the zenith of Pierre Corneille and the advent of Racine" (Harvey and Haseltine).

Although not as important a playwright as his brother, Thomas wrote with great facility. He is credited with perfecting the French language, as can be evidenced by this translation of Ovid (begun shortly after he left school), his notes to Claude Favre Vaugelas Remarques su la langue Francais (1647) , his compilation of a dictionary of arts and sciences for the Academie Francaise (1694), and his editorship of Mercure galant, with Donneau de Vise.

The artist of the two engravings fronting the books is the son of Hermann Weyen (or Weyher), Laurent Weyen (1643-1672), a Flemish engraver who died in Paris. Laurent also engraved illustrations for the works of Moliere.