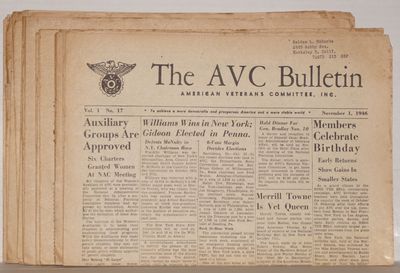 by American Veterans Committee
New York: American Veterans Committee, 1946. 14 issues of the tabloid-format newspaper published by the left-wing veterans' group; spans the period before and after the AVC's expulsion of communists in 1948. Issues present are vol. 1 no. 17; vol. 2 nos. 5, 6 and 8; vol. 5 nos. 1, 4-7, 12; vol. 6 nos. 3, 4, 11; and vol. 7 no. 7. Coverage includes much on AVC internal news, as well as calls for aid to homeless vets, McCarthy impeachment, opposition to segregation, and more. A failed attempt to merge with Amvets, another veterans' organization, left a bad taste in both sides' mouths and the later issues contain polemics against Amvets, including allegations that it segregated veterans into different posts by race. (Inventory #: 181871)
$125.00 add to cart or Buy Direct from Bolerium Books
Share this item