CHESS IN ICELAND; And in Icelandic Literature with historical notes on other table-games 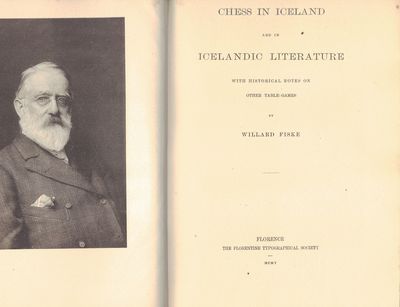 by FISKE, Willard
Florence: The Florentine Typographical Society, 1905. First Edition. 4to, 400. Bound in 3/4 vellum and marble boards with a morocco label stamped in gilt. Frontis portrait, A nice clean copy with wide margins, untrimmed. Fiske I, 156. Van de Linde-Niemeijeriana no. 250. Daniel Willard Fiske (1831-1904) was an American librarian and scholar, born on November 11, 1831, at Ellisburg, New York. Fiske studied at Cazenovia Seminary and started his collegiate studies at Hamilton College in 1847. He was educated at Copenhagen and at Uppsala University. Upon his return to the United States, he acted as a General Secretary to the American Geographical Society and edited the Syracuse Daily Journal. Upon the opening of Cornell University in Ithaca, New York, Fiske was named University librarian and professor in 1868. His interests included chess: he helped organize the first American Chess Congress in 1857 and wrote the tournament book in 1859, and edited The Chess Monthly from 1857 to 1861 with Paul Morphy. (Inventory #: 52200)
$1,056.00 add to cart or Buy Direct from
Second Life Books
Share this item

London : Edward Churton , 1834
(click for more details about MEMORIS OF CELEBRATED WOMEN OF ALL COUNTRIES; with portraits by the most eminent masters)
View all from this seller>