A Prospect on the River Manyfold, at Wetton-Mill 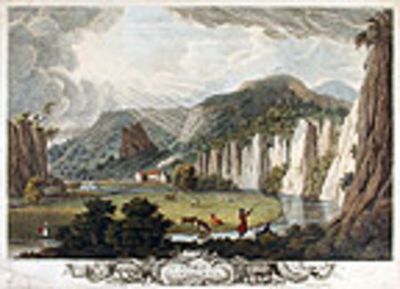 by SMITH of Derby, Thomas (c.1720-1767). Engraved by P. G. SCOTIN
London: Published by Smith, 1757. Engraving with beautiful hand-colour. Printed on watermarked laid paper. In good condition with the exception of some staining in the margins. Two creases along bottom corners. Label on verso of sheet. Image size: 15 x 20 7/8 inches. A stunning view of the River Manyfold, by Smith of Derby, one of the most celebrated English landscape painters. Towards the middle of the eighteenth century a trend developed amongst English artists and printmakers, which sought to visually record the natural beauties of England and Wales. Sparked by a sense of national confidence and patriotism, English printmakers began to publish topographical prints of the important sights in the British Isles. In addition to being a visual record of the countryside they were meant to encourage public recognition of the beauty and history of England. They were aimed at English and foreign tourists who desired a memento of their travels, or at those vicarious tourists who collected topographical prints instead of traveling. One of the earliest and most influential landscape artists to begin this trend was Thomas Smith who came to be known as "Smith of Derby". Smith traveled the north of England painting famous houses and beautiful views. He was one of the first artists to depict wild landscape scenes, which became immensely fashionable with the development of the "picturesque landscape" towards the end of the century. Smith's paintings not only captured the English countryside at the onset of the Industrial Revolution, but also recorded the activities of visiting tourists and local inhabitants. These works capture a period in England's history, which was forever changed by the wheels of progress. Before the mills and the factories came to dominate the landscape of northern England Smith depicted its wild beauty and breathtaking scenery. This lovely print comes from a suite of eight views of Derbyshire and Staffordshire, produced by Smith around 1743. The views were then engraved and offered for sale by subscription, along with letterpress explanations of the sites. This important suite represent the first appearance of precipes and cascades in English landscapes, and mark a pivotal point in the concept of the countryside as sublime. The set was republished twice, first by Smith in 1757 and later by Boydell in 1769. This print is from Smith's second edition. Wetton Mill in the distance was a river run mill for grinding corn. River Manyfold (now Manifold) appears well-named as it forms a large loop before the viewer. Wetton is in Staffordshire. Clayton The English Print 1688-1802 page 155-157, 299. (Inventory #: 15159)
$1200.00 add to cart or Buy Direct from
Donald A. Heald Rare Books
Share this item
Donald A. Heald Rare Books
Offered by