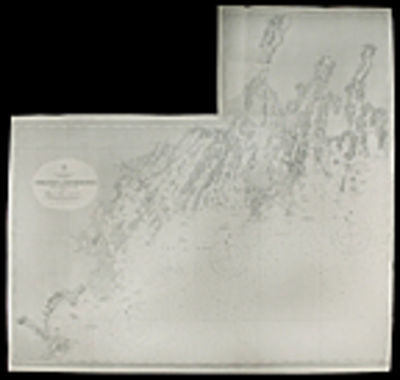 by BRITISH HYDROGRAPHIC OFFICE
London: Published by the Admiralty, 1866. Engraving. Printed on wove paper. In excellent condition. Two joined sheets. Image size: 37 1/2 x 39 1/2 inches. An excellent admiralty chart of Casco Bay, Maine from Pemaquid Point to Fletcher's Neck, produced by the British Hydrographic Office. The British Hydrographic Office was founded in 1795 by George III, who appointed Alexander Dalrymple as the first Hydrographer to the Admiralty. He immediately set to work but it was not until 1800 that the first Admiralty chart was published of the waters around Quiberon Bay in Brittany. Unlike the U. S. Coast Survey the Hydrographic Office was given permission to sell charts to the public and they produced a great number of sea charts covering every corner of the globe. Most of the Admiralty charts produced by the Hydrographic Office delineated coastline as well as high and low water marks and recorded depth of water as established by soundings. In addition these charts included information on shoals, reefs, and other navigational hazards that plagued mariners across the world. Thanks to the innovations of Sir Francis Beaufort, who developed the Beaufort Scale of wind strength, the British Hydrographic Office became one of the leading producers of sea charts. This large chart of Casco Bay, Maine, covers the coastline from Pemaquid Point to Fletcher's Neck. Water depths and sand bars are all carefully recorded, as are the various lighthouses along the coastline, which are identified in colour. This is an important sea chart of this area and a wonderful example of the maps produced by the British Hydrographic Office. (Inventory #: 15995)
$2500.00 add to cart or Buy Direct from
Donald A. Heald Rare Books
Share this item
Donald A. Heald Rare Books
Offered by