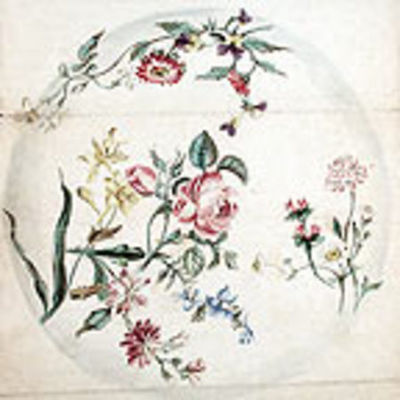 by SAMSON & CO. (designers)
[Paris, 1845. Pen, ink, and watercolour. Very good condition apart from a 7/8" tear along the right edge of the bottom crease, some overall light soiling and minor foxing, and a few skillfully repaired small tears in the right margin, one of which slightly extends into the right part of the image. A rare example of an original watercolour design for porcelain, by the Samson factory of Paris. This finished design was intended as a reference source from which the porcelain painters could work, using the design as a guide for the colours and image to be transformed from paper into fine porcelain. The French porcelain manufactory of Samson & Cie. was established by "Edmé Samson (b. Paris, 1810; d. Paris, 1891) at 7, Rue Vendôme (later Rue Béranger) in Paris. The intention of the firm was to reproduce ceramics from museums and private collections, and it claimed that all such reproductions would be distinctly marked to avoid confusion with the originals. In 1864, the factory was moved to Montreuil by Samson's son, Emile Samson (1837-1913). The range of wares included copies of 18th-century porcelain from such factories as Sèvres, Chelsea, Meissen and Derby, Chinese export-wares, especially armorial wares decorated with famille rose colours and mugs decorated with the Fitzhugh pattern, Delftware, Iznikware, maiolica and faience." (Grove Dictionary of Art). (Inventory #: 14074)
$1250.00 add to cart or Buy Direct from
Donald A. Heald Rare Books
Share this item
Donald A. Heald Rare Books
Offered by