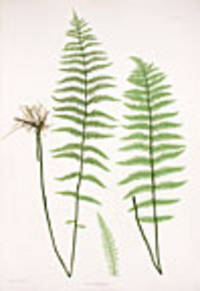 by MOORE, Thomas (1821-1887)
London: Bradbury & Evans, 1856. Colour nature-printed engraving. Very good condition apart from a 1/4" tear in the top margin. A beautiful nature-printed plate from Moore's "The Ferns of Great Britain and Ireland". Moore's important work on nature printing was one of the first of the genre printed in England. The beautifully executed plates were produced under the direction of Henry Bradbury, England's first nature printer, and are considered to be among the finest pieces of nature printing ever completed. The plates were produced "... by passing the plant, under pressure, between a plate of soft lead from which an electrotype could be made" (Blunt). As a result, they recorded the smallest details of flowers and the finest venations of leaves. Bradbury, whose father was of the publishing house Bradbury & Evans, studied at the Imperial Printing Office in Vienna. His interest in printing extended to "... the production of bank notes and the security of paper money, on which he discoursed at the Royal Institute" (DNB) and to the history of printing. He had many ideas for lavish and extensive works, including nature-printed books on fungi and trees and a work on the graphic arts of the nineteenth century, but none of these were ever realised. He died in 1860 at the age of twenty-nine. Cf. Nissen BBI 1400; cf. Stafleu and Cowan TL2 6275; cf. DeBelder 237; cf. Cave and Wakeman 25; cf. Fischer 89; cf. Hofer Bequest 74n. (Inventory #: 17182)
$475.00 add to cart or Buy Direct from
Donald A. Heald Rare Books
Share this item
Donald A. Heald Rare Books
Offered by